“Rise up in splendor, Jerusalem! Your light has come, the glory of the Lord shines on you.” Isaiah 60, 1-6. 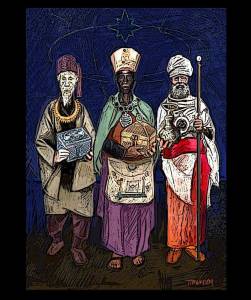 The great American poet, Robert Frost tells us about today’s journey in a poem

“O star, the fairest one in sight

We grant your loftiness the right

To some obscurity of clouds…

It asks something of us here.

So when at times the mob is swayed —

We may choose something like a star. To stay our minds on… “

We are all seekers. We are pilgrims, and all seeking — “to stay our minds,” to chart our course, and navigate our life’s journey.

There are so many paths and so much travel. The very word “travel” comes from the old English word “travail.” Meaning, it’s tough to travel at times. At airports – there are periods of waiting and delays. There’s lousy food, unpleasant accommodations, uncertain weather, and little sleep.

So, pilgrims while traveling are not except form these conditions.

In his recent book and PBS television series “Sacred Journeys,” writer Bruce Feiler states that of every three tourists worldwide, one is a pilgrim. Some 330 million people travel to religious sites each year.

Feiler tells of one story that touched me deeply, that of Army Staff Sargent Juan Roldan, who suffered a traumatic brain injury in Bagdad in 2006 and lost both legs. Along with other soldiers from Walter Reed Army Medical Center, Roldan traveled to Lourdes, making a sacred journey to the Catholic shrine of Saint Bernadette.

Sgt. Roldan tells us: “When I first got injured, I was having nightmares, I was having anger issues. I felt I would be better off dead.”

At the film’s climax, Sgt. Roldan and his fellow pilgrims lined up to bathe in the town’s sacred waters.

Roldan: “As soon as they placed water over my head – I felt a sense of relief. I wasn’t having as much pain; my face felt lighter.” You find out from Bruce Feiler, the narrator of the documentary, that Juan Roldan becomes a better father to his daughter – despite his own physical and personal limitations.

In his recent commentary in the New York Times (12/21/14), Bruce Feiler writes about pilgrims, and wise men from afar who come to the child in the manager, and those of us like them who follow a star and need an anchor to guide our way.

Feiler: “Its that feeling of taking control over one’s life that most affected the pilgrims I met. Most of us and these pilgrims – spend much of their spiritual lives sitting inactively in buildings [like this one], being lectured from on high [from people like me].”

He concludes: “A pilgrimage reverses all of that. It’s a gesture of action. A sacred journey gives the pilgrim the chance to experience something both physical and real. It provides seekers with an opportunity they may never have had; to confront their doubts and decide for themselves what they believe. As appealing as that destination – there’s only one way to achieve it. Get up from your sofa and go!”

We are all seekers, the three kings, Gaspar, Melchior, and Balthasar — travelers, calendar-makers, astrologers, magicians – those Magi who came to the Christ Child. We pilgrims … “we may choose something like a star” to anchor our life’s journey to Christ.