On this Sunday, often referred to as “Laudate Sunday,” we praise God on our journey with Jesus to Jerusalem, and we listen to the conversation between Jesus and his disciple Nicodemus. This dialogue is our invitation to continue our discussion about the Lenten season.

Interestingly, the sign John 3:16, often seen by TV cameras behind goalposts at football games, is this very gospel passage that comes up again and again as an invitation to enter more fully into the divine life.

We heard this gospel both on Trinity Sunday and in Lent. Perhaps a reminder of how God continues to invite us into the sacred mystery of the Godhead, and at this time of year — with Jesus stretching out his arms on the Cross, and welcoming us with open arms into his death and new life, and his great mercy.

Is this invitation to God’s great mercy meant for the few headed to a particular, tiny island of humanity, like some exclusive spiritual resort? Or does the call extend God’s great mercy to the more significant segment of humankind: Jew and Gentile alike, those people of “sincere heart,” and great kindness; those enlightened ones who walk in the light of truth?

Over the centuries, Christians have disagreed on these points, by the way. Not so the pope. On Friday, at a Penance Service in Saint Peter’s Basilica, Pope Francis listened to the confessions of penitents for forty-five minutes. Then, the pope made the formal announcement of an Extraordinary Jubilee Year. The “Holy Year of Mercy,” will extend from December 8 of 2015, and conclude on the feast of Christ the King, November 20, 2016.

In his remarks, Pope Francis called for compassion and pardon worldwide; something, we need to hear. He said: “Let us not forget that God pardons and God pardons again.” (And) “No one can be excluded from God’s mercy.”

Also mentioned in today’s gospel is the theme of “light and darkness.” Are there any deeds of darkness that we need to confess this Lent — to the God of love and light?

Into this darkness comes the image of Jesus and Nicodemus in their nighttime conversation. Reading John, you sense Nicodemus’s affection and respect toward Jesus. Nicodemus listens but also acts on behalf of Christ at the Cross.

When I think of Nicodemus, I recall the 16th-century artwork of Caravaggio. Two highly-acclaimed paintings of his, include Jesus with Nicodemus. The first depicted this particular conversion scene and another picture entitled the “Disposition of Christ,” where Jesus is removed from the Cross.

In both cases, Caravaggio’s painting technique, called “tenebrism,” appears to bring light out of darkness, and uses shadow to emphasize light.

In the Naples church of Pio Monte Della Misericordia, Caravaggio’s third famous painting of the “Seven Acts of Mercy,” rests as an altarpiece — in this artwork, an angel is the central figure – and transmits the grace to inspires our very own acts of mercy.

Referencing the gospel of Matthew, this artwork prods us: to feed the hungry, to give drink to the thirsty, to clothe the naked, to shelter the homeless, to visit the sick, to visit the imprisoned, to bury the dead. Why was Caravaggio so taken with Christ and this invitation to acts for mercy?

Caravaggio’s real name was Michelangelo Merisi, born in Milan in 1571; he was an orphan at a very young age. Then the artist moved to Rome, later to Naples, and received substantial commissions. Nonetheless, he was a very conflicted and violent figure. Caravaggio had killed a man in the act of revenge; he was a troubled spirit in need of forgiveness. He died in 1610, from lead poisoning, the result of his prolonged exposure to the lead from his vibrant paints.

Are there deeds of darkness in our lives that we need to confess to the God of love and light? How does Jesus bring you into the light? 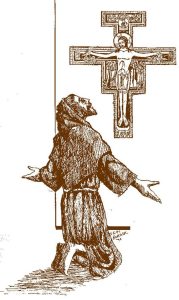 Here is the famous prayer of Saint Francis of Assisi before the outstretched arms of Christ on the Cross:

Most high, glorious God,
Cast your light into the darkness
Of my heart.
Give me, Lord, right faith,
Firm Hope,
Perfect Charity
And profound Humility,
With wisdom and perception,
So that I may carry out
What is truly your holy will?
Amen.