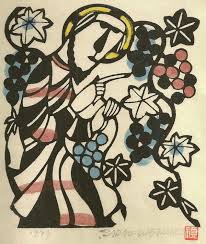 The central concern in John’s gospel is — who Jesus is and what he does for us. We are rooted in him and one another – in family, history, and memory. Like vines, our roots go deep and provide us with identity and self-knowledge. And drawing on a film title, our vines have tender grapes!

From time to time, friends and relatives from New Jersey want to come to visit California and want to go to “wine country.” My reply is that all of California is “wine country,” and in fact, Monterey produces more vineyards and grapes in the “Golden State.”

Nonetheless, many want to visit Napa and Sonoma, and I suppose “wine country” is a state of mind, and a moveable feast, in that many of the grafts and shoots that become vines come from fragments taken from France, Italy, Spain and places unknown.

This past week I took notice of the commemorations of America’s withdrawal from Vietnam, forty years ago. From the TV news accounts I began to relive those events of helicopters atop the roof of the American embassy in Saigon. More clearly, you see the chaos and the images of evacuees leaving for safety and freedom and resettlement in the United States.

A news story caught my attention. It was about the work of a remarkable nun, from Loretto, Pennsylvania, Sister Mary Nell Gage. In 1975, she worked in an orphanage in Saigon, relocating infants, “orphans of that great storm,” and sending them to new families in the United States. Some of the children had been abandoned on the steps of the convent, and most of them were the children of Vietnamese women and American servicemen.

“Operation Baby Lift” had its casualties. You may recall the airplane load of children lost in a dreadful air disaster. Others came to the United States to new families but with little knowledge of their past, nor any recall of parents and Vietnamese roots.

Today, Sister Mary Nell Gage is still at work in Ho Chi Ming City, where she brings many of these individuals, now adults, in their attempts to locate their lost families, their roots, and their forgotten past.

Last week, on CBS Sunday Morning, correspondent Barry Petersen profiled two women of Vietnamese origin — Toby and Stacy, who had come back to Vietnam to locate their families.

Aided with DNA and genetic testing, faded birth documents, and some luck, these Americans with their American spouses completed the long journey home – to find their cousins, aunts, uncles, and a brother. Such a long, long journey from one world to another, filled with anxiety and emotion.

Such is the bewilderment of dislocation, so much in the news today from those thousands of refugees stranded in displacement centers in Italy, Europe, Northern Africa, and the Middle East.

Today’s gospel suggests a similar tone, the fear among Christ’s followers about his presence in their lives after the Ascension. These were underlying concerns about their dispersal and how they needed to be rooted in him and one another. So much of the Old and New Testament are journey stories the Exodus to freedom, and the journey of Jesus to Jerusalem, the Cross, and Resurrection.

In John’s letter, we read: “Those who keep his commandments remain in him, and he in them, and the way we know that he remains in us is from the Spirit he gave us.” (1John3: 18-24)

In so many ways, these verses and John’s gospel reveal the person of Jesus as the true vine, the shepherd, the gate, the way, the truth, and the light – all these among the thirty mentioned in the gospel tell us – who Jesus is and what he does for us.

And how we are rooted in him and one another. As if we, too, have found our real family in faith, with great spiritual memory, and deep roots.