“But once the mustard seed is sown, it springs up and becomes the largest of plants, and puts forth large branches, so that the birds of the sky can dwell in its shade.” (Mark 4:26-34)

Today’s gospel is about the scattering of seeds – the seeds of justice, and the seeds of a new heaven and a new earth, the Kingdom of God.
The “birds of the sky” is a reminder that all creatures find a home in the loving embrace of God. We need patience and perseverance despite our anxiety and anticipations.

June or July are the prime months for “Summer Reading,” maybe you recall a time when you had the leisure to read a few books over summer vacation.There are two possible books you may wish to take a look at this summer, one by Harper Lee, the author of “To Kill a Mockingbird,” and Pope Francis’s forthcoming encyclical “Be Praised, On the Care of our Common Home.

First, the “scattering of the seeds of justice.”

When I was in high school, we were required to read the novel “To Kill a Mockingbird,” by Harper Lee. It had just come out only a year or so before. It was an instant classic and is read by many high school youngsters.

For me, and so many others at the time of the Civil Rights movement, this story helped us see through our prejudices and see the importance of fairness, decency to one another, and the moral clarity in race relations. Of course, the movie version starred Gregory Peck, who played Atticus Finch, the Southern lawyer and moral compass in the “tired old town” of Maycomb, Alabama. 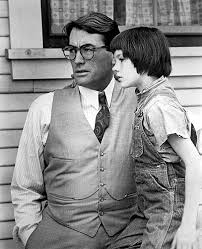 In Chapter 10, Atticus tells Scout, his young daughter, that she can “shoot all the blue jays she wants” with her air-rifle, but not a mockingbird, and adds, “It’s a sin to kill a mockingbird.”

Puzzled by this comment, Scout goes to a nearby neighbor, asks her about this command.

This novel scattered the seeds of justice in the minds of those who read it then. Careful readers grew in their own “moral courage” because of this book; that’s where a truly “great book” can take us.

Interestingly, Harper Lee had another unpublished book that extended the narrative of Atticus Finch and Scout into the 1950s. The text was left in a vault all these many years, and its existence only now has come to light.

This highly anticipated publication is set for July 14th, under the title “Go Set A Watchman.” The title comes Isaiah 21:6 — “For the Lord says, go set a watchman, let him declare what he sees.”

At times we need a guard, that moral compass like Atticus Finch, to see more clearly and help us to conduct our lives rightly and to assure that the seeds of justice are sown far and wide.

My second point concerns the “seeds of a new heaven and a new earth, the Kingdom of God.”

As you may know, our own “moral compass” Pope Francis later this week will publish his second encyclical letter entitled, “Be Praised, On the Care of our Common Home.”

The title comes from Saint Francis of Assisi’s “Canticle of the Sun,” a prayer that praises God, first by thanking God for “Brother Sun, Sister Moon, Brother Fire, and Sister Water.”

Here Pope Francis moves Catholic theology to consider not only “human ecology” but also, and here’s a new term, “integral ecology. “This is how we as humans celebrate all that we have been given and are part of – in creation itself.

Of course, some Catholics may wonder why the pope is getting into issues of climate change and global warming. It’s important to know that our ecological concerns for the welfare of the planet flow for our theology. Also, in the past twenty years, both Saint Pope John II and Pope Benedict wrote and spoke about the pressing issues of ecology and our stewardship for creation.

Now, this does not mean a diminishing of our unique and special role as humans, but rather a call for even greater respect, intimacy with nature, and connection to a wholesome ecology. Saint Francis’s “Canticle of the Sun,” written in 1224, is recognized as one of the first published literary works in the Umbrian dialect. Francis prays:

Be praised my Lord, especially Brother Sun, who brings day and gives light through all your creatures. He is beautiful and radiant.

Be praised, my Lord, through Sister Water, especially when she is very useful, precious, and pure.

Be praised, my Lord, through Sister Moon, Brother Fire, and Mother Earth.

Be praised, those who forgive – for love of you.

Happy those who endure in peace, for by you Most High,

They will be crowned.

For our Summer reading and prayerful reflection, let’s consider how the seeds of justice and the seeds of a new heaven and earth can grow in us — asking for great patience, perseverance, and anticipation of the Kingdom of God.