Today we celebrate “all saints” and tomorrow “all souls.” Those women and men whose lives inspire us still, and whose holy memory make up the “invisible kingdom of the heart.” Such people in our lives have an intensity even today, and so we celebrate saints and souls with an “attitude of gratitude” about how they model for us how we might, in some small way, follow in their examples of holiness.

In Pope Francis’s recent address to the Joint session of Congress, he highlighted four historical examples of Americans. Their lives have changed and even energized the American moral and religious fabric. He mentioned Abraham Lincoln, Martin Luther King, Dorothy Day, and Thomas Merton.

God uses good people to do great things. God uses “good people” not “perfect people” who advance the mission of justice, healing, love of neighbor, and even spiritual awakening. Please note these are good people, not perfect people — an idea that we need to be mindful of as we look back on the lives of the holy women and men.

Today’s gospel from Saint Matthew, the central teaching of Jesus about the moral lives of people, tells about holiness, and how Jesus’s followers might become a “light for the world.” These ethical teachings of Jesus are found in all four gospels.

Here the word “blessed” can also be translated as “happy.” Thus, happy are the poor, those who mourn, the meek, the righteous, the peacemakers.” So there is this inner sense of wholeness and fulfillment given to a person who lives this way, since “your reward will be great in heaven.” Most of all, to live but one of these beatitudes can make you a saint forever. However, in the early church, martyrs were almost exclusively the first saints, namely those who gave their lives for the faith.

In the city of Rome, most of the churches are dedicated to a particular martyr. If you go to the church of Saint Prassede, for example, it’s dedicated to this first-century woman and built in the 8th century. Here you can see above the high altar a very ornate mosaic, a masterpiece that looks like a celestial court of angels and apostles surround God the father, Jesus and the Holy Spirit — with the martyrs as the holy people who have found their eternal reward. So much derived from our reading from Revelation, which states, “Salvation comes from our God, who is seated on the throne and from the Lamb.”

By the 12th century, something changed, namely how we honor holy people who were not martyrs but led holy, exemplary lives. Saint Francis of Assisi is among the very first canonized saints. Why is this the case? While there were many popular or local saints, Pope Innocent formally declared sainthood on Francis, because he was so popular and a challenging figure of his day — demanding more from the church and its leadership — asking us to reform and live a holy life. Francis and the many who would follow him as canonized saints make a particular type of person believable as a Christian type — a hero of holiness worthy of our taking seriously as a model of faith.

Maybe one of the best examples of this type of change comes from the Cathedral of our Lady of the Angels, the Los Angeles Cathedral, the new building designed by architect Jose Rafael Moneo opened in 2002. Inside the building, you see substantial woven tapestries or banners dressing the church that depict 135 saints — women, men, and children.

These images are haunting — all the figures direct their eyes to the light of the great cross window above the main altar. The artist John Nava had the task of giving a human face to saints like Saint Augustine of Hippo, whose precise features are still unknown. The artist used a Hollywood casting agent to find to locate models whose faces and body features a detail of contemporary people make these saints look like you and me.

As the faithful line up for communion with the saints alongside them, the very experience of receiving holy communion with this “communion of saints” is a defining feature of this impressive structure. These are the people whose lives of holiness live out the Beatitudes of today’s gospel.

So the Roman church of Saint Prassede and the contemporary Cathedral in Los Angeles teaches great lessons about how we see holiness and sainthood in people and their lives.

Most of all, All Saints and All Souls days provide us with an “attitude of gratitude” as we come to celebrate their holy memory in thanksgiving for their presence and example for our lives.

“Heroes are those who kindles a great light in the world, who set up blazing torches to see by. Saints are those who walk through the dark path of the world and are themselves the light.” Felix Adler

“For All the Saints,” is among the most inspired hymns for this feast day. This is a version by Ralph Vaughn Williams, “Sine Nomine” performed by the Dordt College Concert Choir in the Spring of 2009.

A Final Word —
Catholics are especially fond of “patron saints” or saints that can get us through a rough patch. The examples are endless. Such as praying to Saint Anthony of Padua when you have lost something of value. Or even the odd practice when attempting a quick sale of a home or building to bury a statue of Saint Joseph on the grounds of a property.

Certain saints have a particular function, such as Saint Monica, the patron of mothers. Others have one specific duty, such as the patron of “expectant mothers,” and this is the purview of Saint Gerard Majella. And of course, Saint Jude Thaddeus, one of the Apostles and brother of Saint James, is the patron of hopeless cases.

Some of these patrons are only loosely connected to their cause. Saint Clare of Assisi, the co-worker with Saint Francis, is the patron of television. She never sat down to watch TV, but she did have telepathic visions. So I guess these visions count. The Irish have an abundance of patron saints, and some have several causes. For example, Saint Fiacre, a 6th Century Irish saint, is the patron of both taxi-drivers, and, in his off-hours, is the patron to gardeners and gardening.

Once at Mass, my friend, the late Father Declan Dean, told the story of an Irish parishioner of his who had a great devotion to Saint Martin DePorres, the lay Dominican brother of Lima, Peru. He is the patron of innkeepers, barbers, and hospital workers, and has a solid following among Catholics in Ireland.
After 125 years, this holy man was finally raised from the status of “blessed” and formally canonized to sainthood by Saint Pope John 23 in 1962. After years of faithful devotion to Blessed Martin, Declan’s parishioner would now have to venerate Saint Martin. 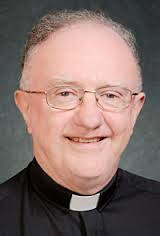 This Irishman considered Martin DePorres his short cut to God’s ear, so he told Father Declan: “Saint (?) Martin de Porres! Watch now that he’s promoted, he would not lift a figure for you!”

Father Declan’s humor and extraordinary preaching ability gave all of us a good laugh. Well, such is the state of patron saints, on this feast of All Saints!

Our Lady of Refuge, Castroville, CA.