Enter through the narrow gate, or door, or that path to salvation where only the select may gain entry. It sounds to me like heavy traffic in “drive time” on a two-lane highway, something like our Rt. 156 connecting Prunedale to Castroville, or Rt. 68 between Monterey and Salinas.

In the first reading, the prophet Isaiah complains about the heavy traffic to Jerusalem “on horses, and in chariots, in carts, upon mules and dromedaries,” believe me he doesn’t know anything about heavy traffic, especially tonight on Rt. 156 or Rt. 68, leaving town after the annual Monterey auto show.

So once again we hear the Lord speak of that select who enter the Kingdom of God and eternal life, not having lives of privilege, preferably those whose holiness and sincere hearts find reward and rest, thus, “the last will be first, and the first will be last.”

Luke’s gospel is about “life-lessons.” We have heard gospels stories and teachings about those blessed that in this life are called to share their blessings. Other stories are about those who experience the underside of privilege and are invited to acts of justice and mercy without resorting to violence or killing to attain their ends.

And occasionally, the gospel pokes fun at those with comic delusions about how their status or wealth makes them the chosen ones, only to find out to their dismay that they missed the opportunity to serve humankind with a generous heart.

In this particular passage, Jesus is asked by someone in the crowd, “Will only a few people be saved? And he replies, “Try the narrow door.”

There is a similar take on this question even today, and it often defines specific religious traditions.

For example, a few years ago, my sister attended the funeral of a friend of hers – which was conducted by an Evangelical Protestant minister. Afterward, at the luncheon, my sister met the minister. As they were serving themselves at the buffet line, the minister asked her, “Have you received the Holy Spirit?” Are you ‘born again?’ Have you accepted Jesus as your Lord and Savior?” To which my sister replied, “Well, yes! I guess, but I’ll have to check with my brother …he’s a Catholic priest.”

The conversation ended there, and then. But this brief encounter helps to illustrate the religious language and distinctive religious imaginations about conversion and salvation.

So if there is a “narrow door,” to eternal life, or a vision of heaven as a “gated community,” we humans over the centuries keep asking what the minimum requirements for entry are?

So here’s where theology is helpful, where two understandings may assist use, namely the principles of the “via negativa,” and the “via positiva.”

These ideas appear to be at odds with one another, but at times work in concert with each other. Namely, one religious view focuses on the individual who sees the world as sinful and in battle with sinister forces. The alternative perspective is a more communitarian and helps us to find God and holiness by embracing creativity and with the help of the saints who continue that creative spark in signs and actions that are sacramental in nature.

Again, the gospel writers are questioning the role of privilege or status, and celebrate the radical idea that no one is unworthy of God’s love.

Jesus’s reply to his questioners undercuts our own presumptive world and calls for individual holiness, coming from those of sincere hearts and demands of his followers a faith that shapes life, adds value, provides service, and dramatically touches the lives of others.

For the past year, in this Extraordinary Jubilee Year of Mercy, we have been witnessing countless people living by the principles of mercy, forgiveness, and tenderness.

Pope Francis and our own Bishop Garcia have asked us to take part in this particular encounter with the Lord, and come to San Carlos Cathedral and other churches in the Monterey Diocese, for the special blessing and indulgences received by praying here.

From my own first-hand observation this summer, the great cathedrals in Italy and in cities like Bologna, Siena, and the major Basilicas in Rome, I saw long lines of pilgrims entering specially constructed doors that marked these holy sites.

A friend of mine, Jim, went to each of these churches in Rome with the expressed idea of receiving the official stamp that marked his walking through the “holy doors” for this particular year of mercy and grace.

In his Angelus address on August 25 of 2013, Pope Francis commented:

“Jesus is the door. He is the entrance to salvation. He leads us to the Father, and the door that is Jesus is never closed; it is always open and to all, without distinction, without exclusion, without privileges…. Jesus is waiting for you to embrace you to pardon you. Do not be afraid: he is waiting for you. Take heart, have the courage to enter through his door.”

Today, we listen to the gospel about the “last will be first, and the first will be last.”

Here’s an inspiring story about American rugby player Carlin Isles  who represents our team at the Summer Olympics in Rio, from the BBC “From Homelessness to Rio.” (August 17,2016).

In the New Yorker, Robin Wright comments, “The Babies Are Dying in Aleppo” and how the 3.7 million children of Syria know only displacement, violence, and uncertainty.

This is the photo of five-year-old Omran Daqneesh as he waits patiently in the ambulance for his parents and family to be dug out of the rubble of Aleppo. 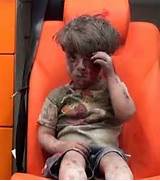