“Whoever does not carry his own cross and come after me cannot be my disciple.” Luke 14:25-33. 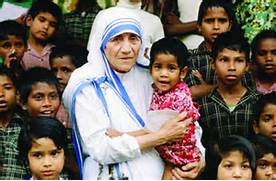 This quote and today’s gospel are among the most sobering statements of Jesus in the New Testament, and ones that both challenge and inspire.

Over the weekend the Catholic world celebrates the sainthood and formal canonization of Mother Theresa of Calcutta, almost on the day of her death, nineteen years ago in 1996.

Now the Church will have three women – saints with identical names; each defined their own work, all three were writers of exemplar spirituality.

So we have Saint Theresa of Avila, Saint Therese of Lisieux (“The Little Flower”), and now Theresa of Calcutta, the first Nobel Peace Prize winner to become a saint.

Interestingly, the challenge of the gospel did not deter Anjeze Gonxhe Bojaxhiu, rather it inspired in Mother Theresa what became a “world-wide mission” to follow Christ and bring comfort and care to the “poorest of the poor.” In 1946, she traveled by train to Darjeeling in the Himalayas, and sensed that God wanted her to be poor with the poor, and to recognize Christ in the “distressing disguise of the poorest of the poor.” This calling defined her life and vocation.

She once said: “We are supposed to preach without preaching. Not by words, but by our example, by our actions. All works of love are works of peace.”

I became aware of Mother Theresa’s work back in 1971 when I saw a BBC television documentary entitled “Something Beautiful for God,” narrated by the British journalist Malcolm Muggeridge.

He later published a book of the same title containing many of Mother Theresa’s inspiring words and personally crafted ideas about religion, and mostly how to work on behalf of the poor. I’ve kept this book at my desk ever since, and have used it on countless occasions.

Here’s a personal story of mine.

At the time of her increasing national and international fame, I was young parish priest, at a large urban parish, Saint Aedan’s in Jersey City, nearby Journal Square. Today, the Jesuits of Saint Peter’s University minister to this faith community.

Back in the summer of 1972, on a hot and humid Sunday afternoon, as a rookie priest, if you were “on duty,” as I was on that day — your tasks after the 12 Noon Mass were to lock the church doors, secure the collections in the rectory safe, take a quick lunch, make sure the air conditioners were on full blast, return to your room, and maybe if everything quieted down you might do what most priest do, namely take a nap.

Yes, as exhaustion sets in you pray that the telephone does not ring. Being “on duty” at this particular parish, came with the added responsibility of overseeing the chaplain’s job at the nearby Jersey City Medical Center. So you can either ignore the telephone or put the phone on the answering service, hoping that your afternoon would be uninterrupted.

One Sunday afternoon, the telephone rang with a series of calls that I attempted to ignore. Of course, this was a time long before cell phones or caller id, but eventually I realized this was the answering service, and I had to pick up.

So on the line came the operator who connected me to a man who told me that the Church was locked tight. And I replied, of course, it’s locked – we always lock the Church after the Masses.

Then, he told me that he and a group of nuns wanted to go into the church and pray. I replied by saying – why don’t you come back ater that evening for the Sunday night Mass. He told me, that won’t do, since the sisters had only one-hour between their other duties.

So now fully awake, I got up, and went down with the keys to the church, to discover a group of nuns, dressed in their white and blue saris, the very distinctive dress of the Missionary Sisters of Charity, Mother Theresa’s order of nuns.

The gentleman told me that the sisters had come from their convent in Brooklyn, and on weekends they visited the sick at the Jersey City Medical Center. He added that before they began their work, they prayed before the Blessed Sacrament for one-hour to prepare themselves for this ministry to the sick and dying.

Here’s the point, I was in my prescribed nap time after Masses, on a hot Sunday afternoon, Mother Theresa and her nuns do not take naps. They are “on duty” more than me and most priests. That’s why they are saints!

Mother Theresa was an activist – doing her work for Christ, day by day, so much so she inspired people around her; and only later did the world take notice.

These sisters from their Brooklyn outpost of Mother Theresa’s order would eventually come to Newark, New Jersey at a time when I would help forward their efforts in some small way with the media of newspapers and reporters who told about their soul-saving works.

Raymond Brown, the scripture scholar, once wrote, “Those who preach balance rarely change the world.” He said that Church ministry is the interplay of having an intended design or blueprint, but also ministry is like one of those “erector sets” you received at Christmas, where part by part, you put into place a design bolted to something else. In other words, ministry and following Christ requires great imagination.

Mother Theresa’s words and actions alerted the world to the needs and hurts of those dying in poverty, especially the young. You will notice that most of the photographs or artistic renderings of Mother Theresa do not have her along side the religious symbols of a bible, or with rosary beads; rather she is most often seen embracing a child in desperate need.

That need is ever more present today for refugees fleeing the Middle East, or that blood stained, five-year old Omran Daqneesh, waiting patiently for his parents in a medical van in Aleppo; a young boy that Mother Theresa would surely embrace.

Great saints light the path for others to follow.

A few years ago, I sat outdoors at a small restaurant in Rome, and overheard at the next table a  conversation of two young nursing students from the United States, who had just returned from India.

At some point, I introduced myself to these young women since I realized that they were volunteers for the Missionaries Sisters of Charity. They told me that as part of their nursing education, they devoted their summer working with the sisters. They told me how exhausted they felt at its completion, and that they were making their way back to the States, to finish their college education.

The work had changed them, and they were only now had the time to fully figure out what this might mean. They were especially mindful of how the sisters themselves worked so hard. Their efforts and the long hours had a deeper reality, and one that Mother Theresa talks about. One that affected the soul as well, and for years Mother Theresa wrote about her journey of the soul, in her diaries and personal writing.

Once she said: “Making nice, is not the same as doing good.”

Indeed, “doing good” for those poor and dying is very difficult work.

More than being nice, it demands something of the person and the soul, and responds to this gospel — which tells the disciples not to look back, and even to carry the cross for Christ’s sake.

Mother Theresa says: “We are supposed to preach without preaching. Not by words, but by our example, by our actions. All works of love are works of peace.”