“The two recounted what had taken place on the way and how he was made known to them in the breaking of the bread.” Luke 24:13-35. 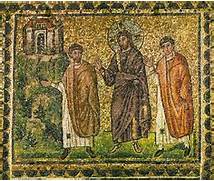 Several years ago, there appeared the gem of a movie, “Julia & Julie” – one of my favorites. It has been re-run on television, and, of course, you can find it on Netflix.

The film was directed and written by Nora Ephron and stars Amy Adams as Julie Powell, and Meryl Streep, as the indomitable Julia Child.

You may recall that after the events of 9/11 in New York City, Julie Powell is overwhelmed with her job, so much so, she seeks a diversion in which she combines her talent for writing with her passion for cooking.

She sets up the unusual culinary challenge, namely to replicate all 524 recipes found in Julia Child’s “Mastering the Art of French Cooking,” in a record 365 days. This marathon found its way onto Julie’s daily blog that received notice from her followers, and later in the New York press.

In a series of flashbacks to the 1950s, film viewers feast on the lives of Julia and Paul Child as they live out their dream — of working in Paris for the United States government.

It was at this time, Julia Child got the idea of taking cooking courses at the famed Cordon Bleu, where she met Simon Beck, and took on the task of writing and editing their “Mastering the Art of French Cooking.”

This was an era in which “French cooking” implied ritual — and precise prescriptions for cooking.

Whether the “chef in training” was making the simple omelet or boiling up a veal stock, the instructions and techniques were taken seriously.

And so, for both Julia & Julie, there were challenges galore – from the soufflé that would not rise, and to those many letters from American book publishers who simply rejected Child’s manuscript; before it was finally published. And of course, the great success for Julia Child followed both in publishing and on public television.

In a way, this film is a love story.

While we see the trials and tribulations of these two women from different eras, we also witness their husbands who have the task of sampling their food — both on good days and bad, in season and out of season, in sickness and in health — the very meaning of marriage itself. Their supportive, loving men provided encouragement despite the odds for success, let alone fame that, for me, is the essence of a love story.

So what is there to say about today’s gospel?

Namely, this gospel passage is a love story. It is a ritual meal in which the presence of Jesus is revealed in the “breaking of the bread.”

Jesus’s on-going presence is both a comfort and support for our daily lives.

And most notably, on this journey of life, this food satisfies our spiritual hunger in such a way to assure that those around this table are the very people we belong to.

May we share the good things of this life, and most of all, look out for and assist those whose hunger from day to day requires us to stop and pay attention to their needs and the hurts of humanity.

So the people you eat with today — at this Eucharist, are the very people you belong to.