This is the first of four parables in Matthew, and in this story, Jesus teaches about the sower. The seed falls on good soil, the seed flourishes, and the plant grows. But not always, so there is more to consider! 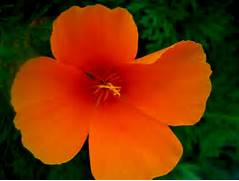 Many years ago, my Aunt Caroline, with her family, came out to visit California and see this region so fertile and rich in natural beauty.

My aunt was most taken by the California orange-colored poppy that was in full bloom up and down the state — at that very time of year.

The poppy is the state flower, after all.

When she returned home to New Jersey, she had the idea of growing California poppy in her garden, but this was in New Jersey. So at her request, I went to a nursery here in Monterey and purchased a bag of seeds.

Then came spring, and the experiment began. My aunt made space for those seeds, planted them, watered them — keep a keen eye on them.

Not in New Jersey, however, so this was a failed experiment.

I said to my aunt: “Another reason to return to California.”

Jesus advises his followers that the sower of these seeds must be relentless in adapting the “word of God” to whatever the condition, and should be exceedingly generous in sowing seeds in good soil; but also on footpaths, or rocky ground, and even amid thorn bushes.

It’s worth a shot! Be generous and hold nothing back – whatever the ground or condition.

Use your imagination. Plant the seeds of justice, mercy, and forgiveness in the best soil, and even under the worst of conditions.

Here’s a favorite quote from a prized America author, Henry David Thoreau, he writes: “Convince me that you have a seed there, and I am prepared to expect wonders.”

Thoreau wrote “Walden,” an American classic about the wonders of our natural world and how they are reflected in our personal, internal spiritual lives.

This past week, July 12th marked the 200th anniversary of Henry David Thoreau’s birth, just outside of Boston.

His solitary life and commitment to the natural world gave rise to a conservation movement in the United States — with such figures as John Muir here in California with the establishment of Yellowstone.

As president from 1901 to 1909, Theodore Roosevelt saved over 240 million acres of wilderness, as part of the National Park Service. By the 1960s, writers like Rachel Carson, so famous for her environmental activism, wrote her classic, “The Silent Spring.”

To my mind, imagination helped preserve so much of our national beauty – so abundant here on our Monterey coast or in our Salinas Valley, what John Steinbeck called the “pastures of heaven.”

Thoreau writes: “Convince me that you have a seed there, and I am prepared to expect wonders.”

In a way, Jesus is telling us that in sowing these seeds, the word of God can expand our imagination to see the beauty of God’s creation, and with these wonders, miracles are possible.

It’s worth a shot!

“A Gaelic Blessing,” by John Rutter, and performed by the Dordt College Choir in Spring 2009.

“Deep peace of the running wave to you.

Deep peace of the flowing air to you.

Deep peace of the quiet earth to you.

Deep peace of the shining stars to you.

Deep peace of the gentle night to you.

Moon and stars pour their healing light on you.

Deep peace of Christ to you.”