Tonight, as we adjust our clocks, gain one hour, and return to standard time, we come to see the changing of time and seasons. 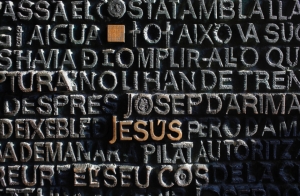 November is a time to recall the saints and souls whose memories we hold dear.

We have holy days such as All Saints and All Souls, and today we commemorate the feast day of Saint Charles Borromeo, the patron of our San Carlos Cathedral in Monterey, and the Carmel Mission. Of course, both parish churches were established here by Saint Junipero Serra in the 1770s.

I’d like to speak about servant leadership. The gospel tells us of Jesus’s frustration that the scribes and Pharisees take seats of honor, but not lift a finger to help others, and ultimately not practice what they preach.

Well, this is an issue in Jesus’s time and ours. Maybe we’re better at pointing out problems than lending a helping hand or lifting a finger.

But the good news of the gospel is that so many people do, this is something we celebrate in our saints and heroes.

For example, Paul, in his letter to the Thessalonians, the very first composition in what would become the New Testament, makes an indirect reference to his work as a tentmaker.

He writes: “You recall our toil and drudgery. Working night and day in order not to burden any of you.” As a result, Paul is working the day shift as a tentmaker and tanner of animal skins. This handicraft provided the parchment or medium for writing that preserves his letters, a fascinating detail to his efforts on behalf of the gospel of Christ.

In past years I had the opportunity to teach about communication and leadership, I would make the case servant that leaders possess a few characteristics, namely leaders informed others, prepared people for change, valued the unique contribution of everyone, and at times mediated conflict.

Well, that’s precisely what Jesus is doing in today’s gospel passage from Matthew. Here he is giving emphasis to the humility that must be at the core of a person’s being to remain effective in the task of servant leadership.

So what is this task of the servant leader? Let’s take a recent example.

On August 20th of this year, the comedian Jerry Lewis passed away at his home in Las Vegas at the age of 91. He died at the same time as Hurricane Harvey was swelling up and catching our attention. So maybe his passing was not noticed as much, or perhaps his artistic legacy as an actor, director, and film innovator is not known to the present generation.

On Labor Day, September 4th, however, Cable TV’s Turner Movie Classics devoted an entire day to Jerry’s Lewis’s films. So many greats, including “The Stooge,” with Dean Martin, “The Bellboy,” where Lewis played dual roles alongside Milton Berle, another comedic genius of the early TV age, and my favorite Martin Scorsese’s “The King of Comedy.”

All of these films, and more, namely Jerry Lewis’s years of leadership in philanthropy supporting “Jerry kids,” and the annual telethon for MDS, muscular dystrophy.

Year after year, on Labor Day weekend, Lewis appeared and directed efforts to bring this cause before the American public, and raising millions upon millions of dollars for medical research that might lessen the burdens of children and adults with this painful disease.

More important, and despite his critics, Lewis’s comedic gags and laughter were never leveled at his these challenged children. Instead, he played the clown that was within him and could get all of us to laugh despite our wounded selves.

And for those who value life, and those in the pro-life cause, I believe Jerry Lewis made his mark in bringing the issues of disability into the policy discussion of how we best support the needs of the handicapped in our schools, hospitals, and in public access.

Much has changed, including how we forward appeals today through social media. For example, at the time of Hurricane Harvey, charities raised over $350 million, and Houston Texans football player J.J. Watt and his foundation alone raised 30 million dollars.

The personal acts of heroism in Houston and the disaster, such as here in Sonoma and Napa counties, give further testimony to the servants among our first responders as well as our fellow citizens.

So much of the gospel speaks to subtle points about the spiritual lives of people. That the first shall be last, or the greatest among us must be our servants and work to advantage those most in need.

Here’s some advice from Mother Teresa: “Do it Anyway.”

This version of the text was discovered on the wall in Mother Teresa’s home for children in Calcutta.

People are often unreasonable, irrational, and self-centered. Forgive them anyway.

If you are kind, people may accuse you of selfish, ulterior motives. Be kind anyway.

If you are successful, you will win some unfaithful friends and some genuine enemies. Succeed anyway.

What you spend years creating, others could destroy overnight. Create anyway.

If you find serenity and happiness, some may be jealous. Be happy anyway.

The good you do today will often be forgotten. Do good anyway.

Give the best you have, and it will never be enough. Give your best anyway.

Here’s a short clip from Jerry Lewis’s “The Bellboy.”