“Then they opened their treasures and offered him gifts of gold, frankincense, and myrrh. And having been warned in a dream not to return to Herod, they departed for their country by another way.” Matthew 2:1-12. 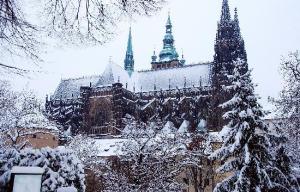 Today we celebrate the feast of the Epiphany or the “Three Kings,” which ends the Christmas season.

For a moment, let’s consider the festival associated with this day and those “gifts that keep on giving.”

Two years ago, on this day, my nephew Phil and I arrived in Prague on a very snowy day, and from our hotel, we walked along icy medieval streets to Saint Vitas Cathedral.

By early evening, the setting was magical — as we took in the scene of a brilliantly lighted church, the reflections from falling snow, and the Christmas market with stalls along the plaza, and vendors selling religious items and food treats to eager customers.

Dressed in the most ornate costumes, men representing the three kings, Balthazar, Gaspar, and Melchior, left from the Charles Bridge in a grand procession to the Cathedral’s door. Here they entered the Church to do homage to its “Infant of Prague,” a devotion known around the world.

Tradition tells us that these kings or wise men from the East were astrologers or magicians. The emphasis is that gentiles or non-Jews would come to believe in the person of Christ, the human face of God among us.

Since the wise men followed the movement of stars, they were calendar makers. So, at Saint Peter’s Basilica in Rome today, the liturgical calendar for 2018 is formally proclaimed at the Mass — with Easter set for April 1. On February 14, we celebrate Ash Wednesday and the beginning of the holy season of Lent.

Mark your calendars for the coming year, with the precious gifts that surround this day, and the year of grace ahead.

Also, the tradition of giving gifts at Christmas or on the Epiphany reminds us that there are cherished gifts in our own life’s journey that “keep on giving.”

Few would consider giving or receiving gold, frankincense or myrrh: gold is too expensive, incense can be smelly and myrrh — let’s say myrrh is too messy! But there are other gifts — those of the heart that we may consider.

A while back, as I was reading the section of the Sunday New York Times that announces marriages, one item caught my attention. It was the wedding notice for a former altar server of mine, Matthew from Saint Cassian’s Church in Montclair, New Jersey.

The news article had just enough information that permitted me to google his email address at this place of business.

I sent a message of congratulations to him and his now-wife, and suddenly it was a reunion of sorts covering some twenty or more years and three thousand miles.

In one of our email exchanges and subsequent telephone conversation, Matt reminded me of an incident that I had vaguely recalled.

Namely, at the time of Matt’s first holy communion, he had come down with chickenpox. As a second-grader, he was quarantined, neither could he go to school, nor attend the much-anticipated Mass with his classmates.

What to do? In speaking with Barb and Bill, Matt’s parents, I suggested that if Matt could not come to Church, we should celebrate a Mass in their home.

And so, a few days later, we celebrated the Mass in the living room of their home with Mom, Dad, two brothers, sister, four grandparents, and the family dog. Young Matthew was the center of attention, dressed as he was in his pajamas, red flannel robe, and cute as a button.

Of course, I remembered this incident of long ago, but there was an extra element that I had forgotten, and in our telephone conversation, Matt recalled this added element.

Namely, on that occasion, I had given him a gift — a copy of the Taize Bible for Children, a wonderfully illustrated bible for young readers.

This Bible had meant so much to him, that it remained in his book collection throughout his religious education.  He went on to say that he and his wife had just moved into a new apartment, and, along with them, he took his belongings, including the children’s Bible. Perhaps waiting for an eager young reader, son, or daughter, who would soon come into their lives.

So here’s my point. It’s always an honor to be part of the real experience of bringing Christ into the lives of young people; it’s that strong association and memory of a moment that contains grace — gifts that keep on giving.

That unique Bible and the sanctifying grace of holy communion have real meaning for us – sometimes long after the giving itself.

Have you (each of us) given such a gift? One that you may not even recall — yet gifts gratefully received, remembered, and also cherished?

Maybe such as gift is not as precious as gold or as fragrant as frankincense or as obscure as myrrh.

There is a timelessness to such gifts that keep on giving, these gifts of the heart. 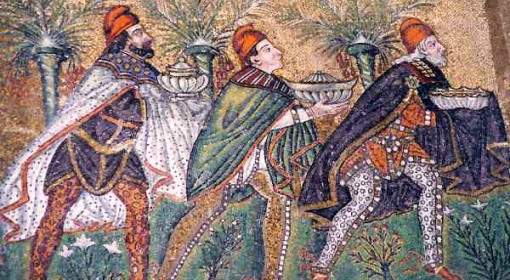 One thought on “January 7: Gifts that Keep On Giving (Epiphany B)”