In the past few weeks, we have listened to the voices of prophets such as Isaiah, Samuel, Daniel, and now Moses and Jesus.

Each speaks with moral courage and authority.

Early in Mark’s gospel, Jesus is in a synagogue in Capernaum where he confronts a man with an unclean spirit.

Jesus says: “Quiet! Come out of him.” The gospel adds that all present were amazed. Again, this was at the outset of Jesus’s public ministry.

At a particular time, certain voices speak to us, make us listen, and take action.

From the prophet Isaiah, there is a line: “Go set a watchman, let him declare what he sees.” These are people whose voices become a moral compass for us.

When I was in high school, we were required to read the novel “To Kill a Mockingbird,” by Harper Lee. It had just come out only a year or so before.

The novel was an instant classic, still read by many high school youngsters and the recent dramatic offering here at Santa Catalina.

For me, and so many others at the time of the Civil Rights movement, this story helped us to see through our own prejudices and to see more clearly the importance of fairness, decency to one another, and the moral clarity in race relations.

Of course, the movie version starred Gregory Peck who played Atticus Finch; the Southern lawyer was the moral compass in the “tired old town” of Maycomb, Alabama.

In Chapter 10, Atticus tells Scout, his young daughter, that she can “shoot all the blue jays she wants” with her air-rifle, but not a Mockingbird, and adds “It’s a sin to kill a Mockingbird.”

Puzzled by this comment, Scout goes to a nearby neighbor, asks her about this order.

That’s why it’s a sin to kill a Mockingbird.”

In a way, this novel scattered the seeds of justice in the minds of those who read it then and now.

Because of this book, readers grew in their own “moral courage,” that’s where a truly “great book” can take us.

Interestingly, Harper Lee had another unpublished novel that extended the story of Atticus Finch and Scout into the 1950’s.

The sequel was published only two-years ago. Its title “Go Set A Watchman.” comes Isaiah 21:6 — “For the Lord says, go set a watchman, let him declare what he sees.”

At times, we need a watchman, a moral compass like Atticus Finch, to see more clearly and help us to conduct our lives rightly, and to assure that the seeds of justice are sown far and wide.

On Wednesday, Judge Rosemarie Aquilina sentenced Dr. Larry Nassar of Michigan State University to a maximum of 175 years in prison.

This week our nation witnessed the testimony of 156 women gymnasts and Olympic athletes who suffered at Nassar’s hands. Each came forward to tell her story of how she was abused by the physician/coach. 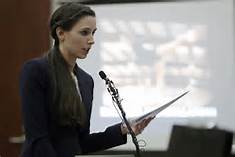 Rachael Denhollander — known as “Jane Doe,” is the watchman and moral compass in this case.

In August of 2016, she filed the first police complaint against Larry Nassar. Also, you should know that Rachael Denhollander, now 33 years of age, is a practicing attorney. Her maturity and legal education gave her the moral courage to reveal her story.

In yesterday’s New York Times, Denhollander published a column entitled: “ The Price I Paid for Taking on Larry Nassar,” where she provides a compelling an account of her ordeal, and the complications when attempting to be a “truth-teller.”

“Absolutely nothing could have prepared me for the pain of being the first to go public with my accusations…. I lost my church. I lost my closest friends, as a result of advocating for survivors who had been victimized by institutional failures in my own community. I lost every shred of privacy.”

In the column, the author points to the twenty or more people who over a period of 30 years were “enablers in a culture” — that took far too many victims, as many as 200 young women.

“Now that the world has been transfixed by our case, we must make sure that not even one more young women is preyed upon as I was.”

“Ask yourself: How much is a child worth?”

Every decent human being knows the answer to that question. Now it is time to act like it.”

Yes, we hear the moral voice and courage of so many women — and the life that was taken out of them because of sexual and physical abuse.

Listen again to the lines in Harper Lee’s novel,

That’s why it’s a sin to kill a Mockingbird.”