“For God so loved the world that he gave his only Son so that everyone who believes in him might not perish but might have eternal life.” John 3:16. 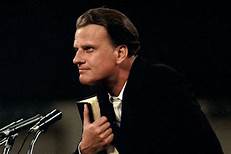 Today’s funeral service in North Carolina for the Reverend Billy Graham paid tribute to the most celebrated Christian evangelist in our time. Years have passed and Billy Graham remained a confident voice in celebrating the gospel. Protestants and Catholics in great numbers appreciated his gospel-based message.

All politics aside, for the most of his career, he focused on the gospel message and a love for the bible. This was an era of a great spiritual momentum in the inspired lives of Billy Graham,  Bishop Fulton J. Sheen, and Martin Luther King.

Back in the 1950’s, I recall Billy Graham’s Madison Square Garden “Crusade for Christ” and how these large-gatherings made such an impact that Catholic bishops and the leaders of mainline Protestant denominations were concerned that Graham’s television ministry might affect their own congregations.

At the time his ministry previewed how the new media of television, radio, and film would re-define how we tell stories, preach the gospel, and how we adapt the gospel for today.

In 1998, among the last of Graham’s public appearances, his Ted Talk on the subject of “Technology, Faith & Human Shortcomings,” provides an insight into this pastor’s genius for the apostolate.

On 2/22, Jeff Bell and Patti Reising of KCBS Radio (San Francisco) interviewed me on the legacy of Billy Graham. Here’s a link to this short piece.

In watching the television coverage of Graham’s funeral service, I was struck at its simple, unadorned American expression of faith, family reminiscences, and music. At the height of Graham’s evangelistic crusade, George Beverly Shea’s music refined the hymnal so much so that even the Roman Catholics adopted these America hymns for  Catholic worship.

Here’s one selection by Gaither Vocal Group at the Billy Graham funeral service.