“All peoples, clap your hands. Cry to God with shouts of joy.” Psalm 47. 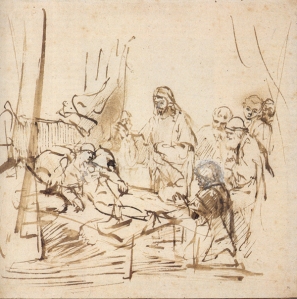 Today’s entrance antiphon has it right.

There must have been a great joy in the home of Jarius at the time when Jesus brought the synagogue official’s twelve-year-old daughter back to life. This was a great miracle story.

Jesus was a preacher, a teacher, and a healer. Mark’s gospel tells us: “He took the child by the hand and said to her, ‘Little girl, I say to you arise!'”

“Arise” is what the Lord tells all of us to see the world in a new and more fantastic light! Because many miracles are going on – all around us! And we have to look for them.

Here’s a small miracle story for you.

About the time of graduation, several years ago, I was working with a friend of mine, whose name is Lane. I was in Lane’s office and took notice of the photographs of his children that were displayed at Lane’s desk.

His son Kevin was about to graduate college, so I asked an obvious question: “What is Kevin going to do after he graduates Ithaca College?”

In a deadpan, straight-forward reply, Lane told me: “Oh, he’s going to join the circus!”

“You must be joking!” was my reaction.

The proud dad restated: “No, Kevin won an audition to be the Ringmaster of the Ringling Brothers, Barnum and Bailey Circus.”

Kevin had plenty of talent for the Broadway stage with his singing, dancing, and acting skills. But the idea of joining the circus was remote — it came out of nowhere. No member of his family had ever left town for the circus life!

As far as the job goes, a Ringmaster must have many skills, most important of which is a confident and authoritative voice. He alerts us to the acts of daring in the ring, or on the trapeze, and gives cover to the often funny and uplifting antics of clowns.

In a recent article, Kevin remarked: “The Ringmaster has the privilege of witnessing the toil, sweat, and genius that goes into creating and maintaining a circus.

Many people make a circus come alive — those who are the stagehands who stand by the safety nets or the ground crew who have the task of setting up the massive circus tents. There are no small parts in the circus where each person has a responsibility for the collective whole.

Kevin added: “Enthusiasm is rooted in a deep and abiding respect for the artist, the crew and the world they inhabit.”

To give an insight into his job, Kevin concluded: “The Ringmaster is a cheerleader in rhinestones!”

So the Ringmaster is a cheerleader! This is a person who has the job of welcoming and saying: “Men and women, and children of all ages, welcome to the big top!”

As we read our gospel today, Jesus has the all-important task of preaching, teaching, and healing. The story of the young twelve-year-old girl is a great miracle.

Perhaps the greatest of all is the welcoming all women and men, and children of all ages. Our Mass is a way of welcoming all to hear his word and take part in the celebration of bread and wine.

Well, there are no acrobats or clowns, no circus animals here but a genuine sense of God’s taking the time to value every one of you, now and in your very uplifting and promising future.

So, in the words of the gospel, “Arise!”

Sometimes because of economics, even the circus has its problems.

More recently, the Ringling Brothers, Barnum & Bailey Circus, went out of business, and not traveling the country anymore.

As an unemployed Ringmaster, what was Kevin Venardos to do?

He started his very own “Venardos Circus.”

This is not a three-ring, not even a two-ring circus; instead, this is a one-ring circus that travels the highways in one large trailer truck.

The confident driver of that truck is the Ringmaster himself!