“Join with others in being imitators of me, and observe those who conduct themselves according to the model you have in us.” Philippians 3:17.

Last Sunday, I mentioned the idea that Lent is a “worshipful journey of wonder and miracles, and I quoted from Jesuit Father Tony Luvardi who writes, “To worship means to move – to ascend the holy mountain, to tread the pilgrim path, to stand, to sit to kneel.” He says that true religion is about “spiritual exercise.”

Let’s stay on the theme of worship, and let’s climb the holy mountain.

Remember climbing requires: head, heart and, for rock climbing, it’s all in the hands!

I recall that moment in the musical, the “Sound of Music” when the actress Peggy Wood as the Mother Superior of the Salzburg convent sang “Climb Every Mountain” to Mary Martin in the stage version. Later Peggy Wood appeared alongside Julie Andrews in the Robert Wise film. Okay, it’s a “show stopper.” Already you may know where I’m going.

Over the orchestra, the lyric soprano sings, “Climb every mountain, ford every stream, follow every rainbow, till you find your dream.”

Not long after this song became a hit tune for Richard Rodgers and Oscar Hammerstein, I traveled to Europe for the very first time and got a glimpse of the mountains in the Swiss, Italian and Austrian Alps.

As the lyrics from the song bounced around in my head, I became very puzzled. It was one thing for the Mother Superior to recommend that Sister Maria climb a mountain to find a dream, but “climb every mountain, ford every stream and follow every rainbow?” Let me say this had better be a huge dream.

To me, Mother Superior’s recommendations are far too demanding, too dangerous, and also strenuous. So pick one dream, one rainbow, one stream, and one mountain at a time, please!

Just the other day, I watched the documentary film produced by National Geographic, entitled “Free Solo,” the incredible and true story of Alex Honnold, a rock climber from Sacramento who, two years ago, scaled El Capitan in Yosemite National Park. This vertical rock stands 7,573 ft. from the valley floor, and it is a wall of solid granite. 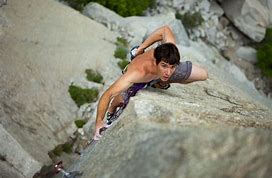 Alex Honnold’s mission was not to climb every mountain, but to climb this mountain! It’s a life-threatening and dangerous feat: no ropes, no safety net, and with one slip, you’re in free-fall. To add to this, a camera crew is watching and recording Alex’s every move upward.

Gravity is a fragile thing, and for Alex, gravity becomes his best friend! The climb itself required months of planning, careful strategy for each phase of the ascent, on the spot quick thinking, and a fearless heart combined with plenty of upper body strength and large, strong hands.

Honnold completed his climb in 3 hours and 53 minutes. Once on the mountaintop, the camera captures an aura that surrounded him with a glow, a calm smile, or serenity at this “free solo” of El Capitan, such an incredible athletic accomplishment.

About the Academy Award-winning documentary, the New York Times writes: “A miraculous opportunity for the rest of us to experience what you might call the human sublime.”

So back to our gospel, and the experience of Jesus as the “human sublime.” He is reflected in the lives of Peter, James, and John.

Today, we move with Jesus on his journey from the desert to a mountaintop, Mount Tabor, which according to legend, is nearby the Sea of Galilee and stands 1,886 ft. Above sea level. This is the setting where Jesus experiences affirmation for his mission and spiritual journey.

In his Dictionary of the Bible, John L. McKenzie comments, “The Transfiguration is much more than a doublet of the baptism of Jesus or a misplaced resurrection apparition. It is a statement that the Son of Man, even in his earthly existence, is the glorious Son of Man who is recognized in his glory after his passion and death.”

So Jesus and his friends climbed this mountain, and from that height, they heard from the cloud, “This is my chosen Son; listen to him.”

We read that Jesus was left alone, and they fell silent. So how did Jesus respond? If we read Father McKenzie correctly, we might say, “an aura surrounded Jesus with a glow, a calm smile or serenity.”

Jesus, in his earthly existence, is the glorious man who is recognized in his glory after his passion and death.

Here is the chance for us to experience this miracle, this transfiguration of his, and the human sublime.

As we experience our Lenten ascent, let’s climb this mountain of ours, with head, heart, and strong hands, one heap at a time!