“The disciples recognized the Lord Jesus in the breaking of the bread, alleluia.” Luke 24:35.

Today’s gospel gives an account of the conversation of Jesus with his two disciples on the road to Emmaus.  In a special meal, Jesus reveals himself as the Lord in the “breaking of the bread.” Here is a well-stated truth: “The people you eat with – are the people you belong to.”

For the past five-weeks, many of us are cooking and baking. On Wednesday morning, my friend Eileen Roberts-Farley posted a photograph on Facebook of her eight loaves of wheat, and the next day she baked an additional twelve loaves. They were delivered to her school colleagues, who have been sheltering in place. All of this, while her husband, Tim, distributed school supplies to the Boys and Girls Club of Martinez’s distance learning program.

Tim comments: “Baking and volunteering are good for the soul. Pan de vita. We will get through this together!” 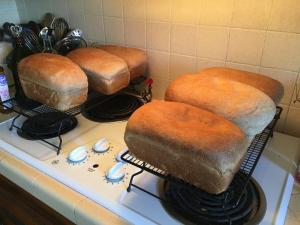 In my case, I’ve been relying on my mother’s recipes and hand-written commentary in one of her treasured cookbooks, namely Fedora Bontempi’s “The Bontempi Cookbook” (Prentice-Hall, Englewood Cliffs, N.J. 1965).  Yes, to my surprise, you can still order used copies on Amazon.

It’s simple and straightforward and translates a range of Italian cooking into the Italian-American idiom. In the 1950s and ’60s, Fedora Bontempi and her husband Pino, an opera singer, had a local New York television program on Saturdays on WOR-TV.

The past few weeks have been very nostalgic for me while having the time to make my version of lasagna, and perfecting polenta. Most of all, I recall my grandmother, whose homemade raviolis were the feature for many Sunday dinners. In those days, attendance at this family table was an obligation as much as our attending Noon Mass at Saint Francis Xavier Church on North 8th Street, in our hometown of Newark, N.J.

Again, the “people you eat with — are the people you belong to.”

This sense of belonging made greater sense to me, years later, when I was a seminarian. As part of our training to become priests, we needed exposure to the “real world” of parishes, so my “apostolic assignment” was Saint Joseph’s in West New York, New Jersey, directly across the Hudson River from Manhattan.

In the 1960s, this parish was experiencing an influx of Spanish-speaking parishioners, many from Puerto Rico and Cuba. To better assist the pastoral care of the newly arrived, Father Joseph Fitzpatrick, S.J., a sociologist from Fordham University, consulted with the archdiocese to develop a survey of the parishes of which St. Joseph’s was the first study.

My brother seminarians and I, as well as a group of Cuban teenagers, canvased the neighborhood. With printed surveys in hand, up and down streets, in and out of large and crowded apartment buildings, we knocked on doors. It was a strenuous, labor-intensive effort and a sweltering summer in which we attempted to speak Spanish. At the time, we recognized the obvious, namely what had been a German, Italian, Irish and Jewish population was quickly becoming the Spanish speaking enclave of Northern New Jersey. One realization came to me like a thunderbolt, and it has to do with food and culture.

To ensure the accuracy of the survey, occasionally, Father Fitzpatrick’s graduate assistant, Marta, would accompany us. She spoke several dialects of Spanish and had lived in South America. When we went down a long row of apartment doors, she could distinguish the precise nationality of families. In most cases, without knocking on the door, she could tell whether the occupants were Cuban, Brazilian, Ecuadorian, or possibly from Belize? This telepathic ability of hers came from a tell-tale clue, namely the pungent waft of cuisine being prepared in the individual apartment. She did this with uncanny accuracy.

And yes, after a short while, we seminary students were invited into the homes of new parishioners. While conversing with an improvised, halting Spanish, often, we shared a massive plate of wonderfully cooked arroz con pollo. From these encounters at the family table, we became acquainted, listened to their stories that better equipped the parish to assist these families, and help educate their children in their new country.

After these many years, Father Fitzpatrick’s dictum remains with me. In reviewing our overall effort, he told us that our simple task was “to explain the new immigrants to the old immigrants.” This idea is as current today, as it was then.

What is there to say about today’s gospel?

We, too, journey with the Lord in light of the Resurrection – even after the long shadow of the cross.

We stand as witnesses of the light – asking for God’s presence, warmth, and healing at the welcoming table of hospitality and friendship – a transformative act that can change hearts.

The Emmaus story, today’s gospel from St. Luke, is a metaphor of welcome: Jesus is walking with us, he is listening to us, he is talking to us – nourishing us, and mostly empowering our lives.

At such a meal, in our homes and our churches, Christ is revealing himself by saying: “If you love me, my Father and I will make a home with you.”

This pledge is his Easter promise for each of us, and our families now gathered at our tables. Our sheltered lives can be healed and made whole in this sacred banquet with him.

Over the years, our Santa Catalina students have volunteered at the Food Bank for Monterey County.

A donation to those organizations whose work is the day to day support of families or seniors, most notably to place food on the table — speaks to today’s gospel message.

To contribute to the Food Bank for Monterey County, go to https://foodbankformontereycounty.org/donate/