“In all circumstances give thanks, for this is the will of God for you in Jesus Christ. Do not quench the Spirit. Do not despise prophetic utterances. Test everything; retain what is good.” Thessalonians 5:16-24 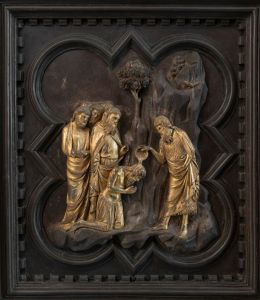 Early in John’s gospel, we witness a narrative or drama in which a great prophet and herald, John the Baptist, passed along his mission and light to Jesus.

In the 1970s, one of our country’s foremost scripture scholars, Raymond Brown, made the point that “those that preach balance” rarely change the world.

In this sense, John the Baptist and Jesus were transformative figures – whose mission and message boldly changed the world.

One feature of my years as a college teacher was the opportunity to learn from faculty colleagues. Christian Brother Ray Berta, with his Stanford doctoral degree in arts education, became my artistic muse. Brother Ray provided so many of his students with “enlightened eyes,” and most especially me when visiting great museums or art galleries.

One of Ray’s insights remains with me and concerns John the Baptist. His point was that before the twentieth century and modern art, the Baptist was the prominent figure in Renaissance painting and sculpture, and second only to Jesus.

In a recent Wall Street Journal article (Dec. 5/6, 2020) entitled “Gateway to a Saint’s Story: The Florence Baptistery Doors (1330) of Andrea Pisano,” author Joseph Giovannini gives a current example of how John the Baptist, the patron saint of Florence, holds an iconic place in the history of western art.

Here the author examines the baptistery itself, which is dedicated to the saint and located at Florence’s cathedral church, Maria del Fiore.

Giovannini reports that after a three-year restoration, the baptistery’s massive bronze doors have been placed indoors for protection from weather and floods. In the main hall of the cathedral’s art and sculpture museum, art patrons can view the doors, now under protective glass. There are 20 narrative reliefs in gold leaf that decorate the doors and depict scenes from John the Baptist’s life.

More than merely flat figures on a canvas, the works of Andrea Pisano and later Lorenzo Ghiberti originated a new visual era in the High Renaissance between the years of 1329 and 1453.

Drawing on Saint Francis of Assisi’s spiritual legacy, the artists transformed both Jesus and John the Baptist into figures with human expressions and bold actions. Across the centuries, these works of art imparted a vision of how the virtuous qualities of Jesus and John could heal, nourish, and strengthen our lives.

Further, in the WSJ article, Joseph Giovannini focuses on a new spatial realism in the panel relief entitled “Baptism of the Multitude.” The author concludes that Andrea Pisano’s doors helped open a fresh, modern, and even religious sensibility, and writes:

“Figures waiting to be baptized by St. John are lined up three or four deep giving a sense of depth to a naturalistic vignette where the Baptist stands in front of a rock outcropping with trees behind. Where artists in the Middle Ages had indicated spatial recession by stacking figures and forms one above the other, Andrea Pisano layers them behind each other. The panels were steppingstones into the perspective that would be more fully developed a century later.”

Our Advent perspective sees both Jesus and John as the great prophets of a new age and heralds of an invisible kingdom of the heart.

We must be watchful and open to prophets like John. Our hope arrives in the humility of Mary, and Joseph, homeless strangers in Bethlehem, with a new-born resting in a manger.

This Advent in the year of the Lord 2020, we celebrate Emmanuel, God with us. His name is Jesus.