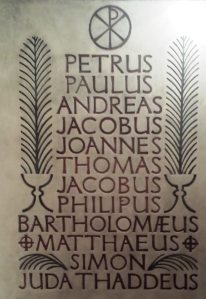 In the early chapters of Mark’s gospel, we read of Jesus’s preaching and healing powers. In Simon and Andrew’s house, the Lord’s words and gentle touch heal Simon’s mother-in-law.

Isn’t it fascinating how Jesus is especially concerned about the welfare of friends and relatives? Later he demonstrates to his followers how this healing ministry must extend to all those desperate with illness and the most vulnerable, especially children.

Those following Jesus were his kinsman, “apostles in training,” including James and his brother Jude. Of course, this is Saint Jude Thaddeus, best known as the patron of desperate or lost causes and hospitals. In popular devotion, Jude is a symbol of choosing faith when all appears adrift.

There is precious little known about Jude and only three brief mentions in the Gospels. While there is a letter attributed to him in the New Testament, contemporary scholars doubt his authorship. Perhaps, the pretext for the title of a Thomas Hardy novel, “Jude the Obscure.”

Jude was never obscure for me, however. From my office window at Saint Mary’s College, where I taught for so many years, I could look out at a grassy courtyard where there stood a statue of Saint Jude. Daily I saw its imposing figure, the work of a contemporary Piedmont, CA sculptor, Bruce Wolfe.

Last week, in a telephone call, Bruce Wolfe told me how Saint Jude was his subject. Still, he drew insights from the late Christian Brother Dominic Beradelli, who became an inspiration to the artist and so many who revered “Brother Dom.” 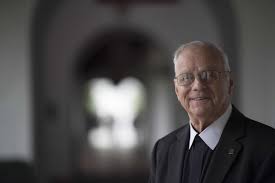 Dominic provided the details of how the figure might look: the representation of a man with a spear in one hand, the symbol of martyrdom while clenching a medallion of Jesus’s image, the suggestion of Jude’s family relationship to Jesus. 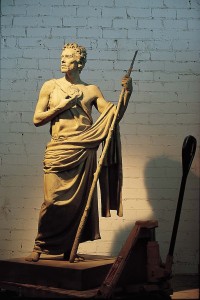 Wolfe’s rendering of this Saint Jude is not the sentimental, nostalgic likeness of an older man who is “past his prime.” Instead, here is a persistent young man on a mission whose physique might be found in the pages of Men’s Health Magazine. This Jude could lift weights, maybe defy the very gravity that pins us down in times of trial or emotional difficulty. Like a “personal trainer,” this is a saint who readies us for spiritual fitness, so essential when facing life’s most desperate moments or lost causes.

According to tradition, Jude suffered martyrdom around 65 A.D. in Beirut, present-day Lebanon, alongside the apostle Simon, with whom he is usually associated. In Richard McBrien’s “Lives of the Saints,” the theologian touches on an interesting fact: “Only in the twentieth century did he (Saint Jude) become known as the patron saint of hopeless causes.”

It’s here where one person’s devotion to Saint Jude helped forward a belief that “no child should die in the dawn of life.” In a series of unexpected but pivotal events, this belief, and its patron saint became the catalyst for entertainer Danny Thomas and his wife Rose Marie to establish Saint Jude Children’s Hospital in Memphis, Tennessee.

Since 1962, this internationally recognized research hospital has helped children who have cancer and other childhood diseases. Along the way, Danny Thomas enlisted a host of supporters, including Cardinal Stritch of Chicago, and drew on donors from across the United States, especially his fellow Lebanese Americans and so many of Arabic-speaking descent.

This past week, a newspaper headline caught my attention. It read: “Elon Musk’s Space X announces a spaceflight intended to raise money for St. Jude Hospital.” The story is that of a crew of private citizens will orbit around the earth, by the end of the year, in a mission designed to raise money for the hospital. The flight is funded by Jared Isaacman, the 37-year-old founder of a technology company and accomplished pilot who will be a crew member. He is donating two of the seats on the spacecraft to St. Jude in an attempt to raise $200 million for the hospital. 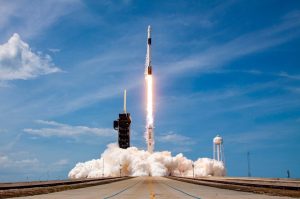 Isaacman gave this space mission its name, “Inspiration4.” He vows to inspire support for St. Jude with a humanitarian message of possibility. He says: “We do firmly believe that there is going to be a world, 50 or 100 years from now, where people are going to be jumping in their rockets like the Jetsons…If we can accomplish all of that, we sure as heck better tackle childhood cancer along the way.” Such energy and bold vision!

Yes, Jesus’s journey of healing and the work of Saint Jude did not reach the sky but their energy and vision touched all humanity. Their preaching is an inspiration to bring comfort, respect for life, and care for the most vulnerable children. In the words of Danny Thomas where “no child should die at the dawn of life.” 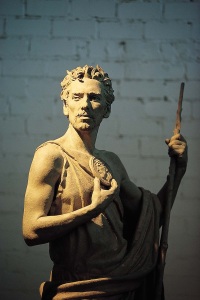 Most holy Apostle, Saint Jude Thaddeus, a friend of Jesus, I place myself in your care at this difficult time. Help me know that I need not face my troubles alone. Please join me in my need, asking God to send me: consolation in my sorrow, courage in my fear, and healing in the midst of my suffering.

Ask our loving God to fill me with the grace to accept whatever may lie ahead for me and my loved ones, and to strengthen my faith in God’s healing powers.

Thank you, Saint Jude Thaddeus, for the promise of hope you hold out to all who believe and inspire me to give the gift of hope to others as it has been given to me. — Saint Jude, Apostle of Hope, pray for us!