“Amen, I say to you, this poor widow put in more than all the other contributors to the treasury…. She, from her poverty, has given all she had, her whole livelihood.” Mark 12:41-44. 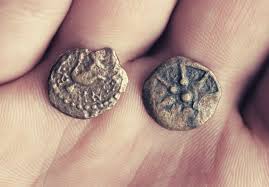 In Mark’s gospel, we read about a widow of great personal courage and generosity. Jesus picks her out of the crowded temple, and she becomes an example of a person worthy of salvation and eternal reward.

Jesus’s viewpoint is that each person forwards the religious ideal and that our human condition outweighs even the importance of the temple itself. He asks us to see deeper into our spiritual commitment, go beyond the buildings, and look into our own personal behavior and, at times, examine our inner conflicts and contradictions.

In Jesus’s mind, the widow represented the “little people” who contributed to King Herod’s grand temple. After all, this centerpiece of Jewish life was two times larger than the Roman Forum in size, expense, and luxury. In the second reading, the Letter to the Hebrews, we are reminded that Christ Jesus is “our priest before God” and the “True Temple,” again the human condition has greater importance in the end.

Often we hear the maxim, “Practice what you preach.” Such a simple matter, perhaps, but an occupational hazard for a priest, minister, or rabbi tasked with preaching. Jesus understood this inherent contradiction in the priestly class. So much so, the idea of practicing what you preach finds its way into the Catholic ordination ceremony when the bishop tells the newly inducted priests or deacons, “Receive the Book of the Gospels. Believe what you read. Teach what you believe. Practice what you preach!”

So we must be people of sight and insight. Let’s see with Christ’s eyes those things that may often be hiding in plain sight.

You may call this the very phenomenon of contradiction. Like magic with a sleight of hand, sometimes we see it, and most times we don’t.

Years ago, in graduate school, I took courses with a great teacher, Neil Postman, who wrote many influential books on media studies. He was a linguist essentially and examined how language influences the mind. He explored metaphors and figures of speech that take hold of our actions and belief systems. He argued among the most powerful of these is a contradiction.

What is a contradiction? The formal study of logic is an unconditionally false proposition, such as a “square triangle” or a “snowy Summer’s day.” You may suspect a contradiction in a person’s actions, a misplaced object, or a situation with inconsistent elements. Most detective novels work on this premise.

Postman once wrote: “It is not necessary to conceal anything from a public dull to contradiction and drugged by technological diversion.” How often do we pay more attention to texting on our cell phones and ignore the person next to us attempting to tell us something?

Practice what you preach, yet some basic human needs are hidden in plain sight. Here are examples of contradictions that come to mind.

A friend of mine, an advocate for social justice, recently attended a three-day conference on homelessness and poverty. This event was housed at the Four Season Resort Hotel in Seattle. Do you see the contradiction already? Attendees were urged to contribute financially to the homeless cause in their respective cities. My friend became aware when listening to speakers or experts talk about the homeless or fellow attendees dining with ample food and refreshments when there were no homeless people to be seen among them nor speak for themselves. Practice what you preach, yet some basic human needs are hidden in plain sight.

Here’s a local example down Rt. 68 highway from here, and nearby the Monterey Airport. There is an enclave of high-priced condominiums in and around Ryan Ranch. Get this contradiction, hiding in plain sight. Typically, most homes have an attached garage to house one or two, possibly more automobiles. In Monterey/Carmel, with our annual Car Show in August, there is a fascination with high-end and expensive automobiles. Instead of housing people or families, this condominium is a garage for high-end cars with a living space for owners above their collections of rare Ferrari, Lamborghini, Aston Martin, or Porsche.

So hiding in plain sight, the homeless in our area live in cars and small trailers or vans. Some people park and sleep in their vehicles overnight, lucky to have shelter nearby a marsh and pond area in Seaside.

What to do? How do we see with Christ’s eyes?

An actual role model stands out for me,  Father Jack Egan, a priest of the Chicago Archdiocese who ran anti-poverty programs in his city and later taught social justice at the University of Notre Dame. His training for those who would work for the poor and homeless was unique. He insisted the any prospective social worker would live on the streets of Chicago for one week, take the guise of a homeless person, live in shelters, eat and learn from those on the streets. His belief was to be effective, one would have to identify with the very people you wish to help. He was again seeing with the compassionate eyes of Christ.

In light of this gospel, and the many ways the gospel of Jesus is compromised — let us all practice what we preach.

Most of all, welcome those on the fragile sectors of life. Take notice of the widow, the homeless, the disabled veteran, and immigrant children with personal gentleness and generosity of heart.