“So Jesus performed at Cana-in-Galilee the first of the signs which revealed his glory and led his disciples to believe in him.”  John 2:1-11 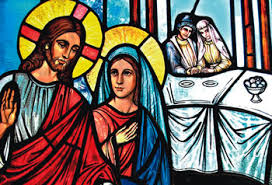 In John’s gospel, this story about the wedding feast at Cana is the first impression of a community that recalled Jesus’s saving powers. For centuries, scholars have poured over this passage for its dramatic action, the response of Jesus to Mary’s request, and his service to the unnamed couple.

For those lucky enough to be invited to the gathering, the leftover wine in six jars amounted to 120 to 180 gallons: an abundance like the gifts of the Magi, or the words from on high at the Jordan River about the “beloved son,” this miracle reveals God’s glory.

This first impression or epiphany marked Jesus’s life’s work and his person-to-person ministry. Such a miracle helps to weave a gospel narrative in which the apprentice rabbi gains a popular following as his disciples witness his spiritual powers.

The armature or the glue that holds any drama together, and the gospels are no exception, is the dialogue. Throughout the New Testament, Jesus’s mother Mary appears ten times, but on four occasions, drawn from both Luke and John’s gospels, we read her precise words.

At the marriage feast of Cana, Mary observes, “They have no wine,” and after speaking to her son, she directs the waiters, “Do whatever he tells you.” These words add a vital woman’s voice to the story and represent Mary’s last lines of dialogue in the New Testament.

For this tiny drama that is the wedding in Cana, her words are most powerful. How so? We know little about the couple, nothing about the festivities nor the parents or clan, but we hear the back story and the practical dilemma of so little wine for the large crowd.

But mostly listen to Mary’s astute observation about her son and his miraculous talents. She says, “Do whatever he tells you.”

Here, Mary triggers insight into their future work as preachers and healers on a mission.

Much later on, the gospels record that Mary was present with the disciples at Pentecost with the outpouring of the Holy Spirit. Consequently, today’s reading from St. Paul’s Letter to the Corinthians has resonance for us and values the gifts of the spirit and how they contribute to and benefit our lives and our witness in the world.

We’re learning about how we use these gifts and even testing ourselves. You, too, have miraculous talents. How so? Please take notice of the world and its people around us. How do we use our God-given gifts of wisdom, knowledge, healing, prophecy, discernment, languages to extend the Kingdom of God? Paul counsels us by saying, “The same Spirit produces all of these gifts, distributing them individually to each person as he wishes.”

Be insightful as Mary was – look deeply at the needs and hurts around us. Don’t blink! Because of the gospel, you have enlightened eyes.

Sometimes the most mundane interactions might spark a concern, address a particular need, and can open up the world for us.

Most of all, speak out and say, like Mary, “Do whatever he tells you!”