“And God brought him outside and said, ‘Look up at the sky, and number the stars, if you can.’ Then, he added, ‘So shall your offspring be.’ Abram put his faith in the Lord and counted it to him as an act of righteousness.” Genesis 15:5-6.

Lent has begun. We are in its second week and on a journey. We join both Abram and Jesus in this profoundly spiritual Passover to a land of promise and eternal life.

Abram means “exalted father,” but only when he accepts his role does God give him the name of Abraham, indicating a “father of many nations.” So too, with Jesus on Mount Tabor, in this moment of transfiguration, we hear the voice affirm, “This is my chosen Son, listen to him.”

Both themes reveal who we are in this time of discernment that is our Lenten journey. It’s the story of the Transfiguration, and Abram’s stargazing into his improbable future. How often do we do that? Asking what’s my future or my direction? With God’s guidance, we can see stars, brilliance, and direction.

Let’s consider these questions: How many stars can you count in the night sky? Hiking, mountaineering, or trekking, anyone?

My moment of stargazing awe came several years ago in Queensland, Australia, in the small town of Port Douglas. It’s a beach resort located on the brink of the Great Barrier Reef. The lifeguard stations have big signs that caution swimmers about shark and poisonous jellyfish in the surf and, for those relaxing on the sands, the added reminder of crocodiles that roam the beaches. So, I guess there are dangers even in paradise.

At night, the stars become the show from this remote place and one that I had not entirely expected, with all the glow of New York’s Hayden Planetarium. However, in Port Douglas, this stargazing brought “astrophysics to life.” 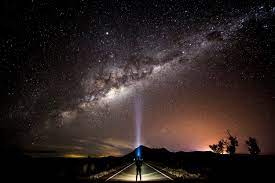 At that moment, my friends and I sensed both calm and awe. With so little artificial light, the stars, the planets, and an occasional artificial satellite popped out of the sky.

Very soon, we will see the results of the newly launched James Webb Space Telescope, poised 700,000 miles from Earth and capable of seeing what the universe looked like 100 million years ago when the first stars and galaxies formed.

Today’s reading from Genesis in which Abram counts the stars first mentions this heavenly power.

Scholars tell us that Venus and Saturn are the only planets named in the Old Testament except Earth. Jupiter and Mercury are mentioned in the New Testament. Overall there are 100 bible verses about the heavens and stars.

These forces of nature give evidence of a divine companionship with Abram, Noah, Moses, and Job and seal a covenant with the promise and signs of wonder.

For Noah, most notably, after the great flood, there is a rainbow. And for Abram, and later Moses, their people’s journey to a promised land, that glorious fulfillment, was a place of milk and honey. Their acts of righteousness are blessings from God. 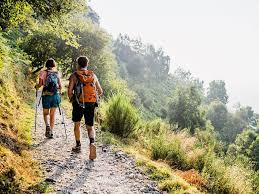 Hiking, mountaineering, or trekking, anyone?

I’m not especially fond of hiking or long-distance trekking, and not climbing mountains. My only attempt at climbing a mountain, a natural high altitude climb, came from visiting my relatives years ago when I was a college student.

They have a summer residence nearby Lanzo D’Intevelvi, located on the Italian Swiss border. The town rests on Mount Generoso, which stands at 5,581 feet above sea level and between Lake Como and Lake Lugano.

My young cousins and I began on an early Saturday morning trek up the mountain. We followed picturesque trails, passed through meadows, met a local shepherd with his very malodorous goatherds. Later we encountered board guards who checked to ask whether we carried alcohol or cigarettes.

Beyond the tree line, along the side of the mountain, there was a rocky pathway that ran for several miles up the steep terrain.

We reached the mountain’s summit by two in the afternoon, and I was worn out and shattered. Relief came from knowing the trek had ended. The restaurant at the top of the mountain was in sight. It was where our relatives greeted us. They had arrived the more conventional way, namely by train.

On the Swiss side of Mount Generoso, there is a light-rail train system that brings tourists to the very top of the mountain to witness the awe-inspiring vistas of Lugano and, in the near distance, the Matterhorn.

This Lent, we travel with Jesus on his journey from the desert to a mountaintop, Mount Tabor, near the Sea of Galilee, and stands 1,886 ft. above sea level. This is the awe-inspiring setting where Jesus experiences affirmation for his mission and spiritual trek to the cross.

John L. McKenzie comments, “The Transfiguration is much more than a doublet about the baptism of Jesus … It is a statement that the Son of Man, even in his earthly existence, is the glorious Son of Man who is recognized in his glory after his passion and death.”

So Jesus and his friends climbed this mountain, and from that height, they heard from the cloud, “This is my chosen Son; listen to him.” We read that Jesus was left alone, and they fell silent.

How did Jesus respond? We might say, “an aura surrounded Jesus with a glow, a calm smile or serenity.” Here is our chance for us to experience this affirmation, this transfiguration of his, and the human sublime.

As we experience our Lenten ascent, let’s climb this mountain of ours with solid hands, one precise movement at a time!

At times writing the homily and publishing for Friday is like a pressure cooker. It might be too fast a process. Only when I make contact with you, the congregation I notice that I may have missed an insight or opportunity.

Listening to Father John Unni of Saint Cecilia in Boston, earlier today, he reminded his congregation of the legacy of Paul Farmer, who died on February 12 at the age of 62.

Dr. Paul Farmer was a man on a mission. His humanitarian efforts in Haiti and Rwanda awakened me and so many people around the globe to the idea of health equity for the poor. He argued that all people, whatever their status, should have the same quality of care.

At the memorial service this past week, his close friend and colleague, Dr. Anthony Fauci said of Paul Farmer, “he was selfless in a community of need, and as a physician, he brought healing, hope, and light.”

Focused on the Transfiguration, we see in Jesus, a beloved son who changed the world, mountains beyond mountains.

In Paul Farmer, we witness a life of service, a beloved son, whose work of healing touched souls, mountains beyond mountains.

Here is a short report from the PBS News Hour:

Here is Dr. Paul Farmer’s Memorial Service at Trinity Church Boston. You can listen to Dr. Fauci’s remarks mid-way through the service.

Listen to the Introit of Morten Lauridsen’s “Lux Aeterna.”