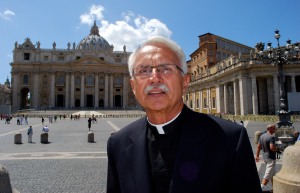 Michael A. Russo is a retired professor of Communication Studies at Saint Mary’s College of California, Moraga, nearby San Francisco in the East Bay. He has taught courses in the history of the print and electronic media, journalism, and political communication. He was Chair of the Communication Department from 1984 to 1996.

Since his college days at Seton Hall University in New Jersey, he has maintained a long-standing association as a producer/consultant to CBS News. In the late 60’s, he was a desk-assistant to Walter Cronkite during special events broadcasts of the space program, and he traveled to Rome to report on the death and funeral of Pope John Paul II, and the election of Pope Benedict XVI. He reported for both national and local media on the resignation of Pope Benedict, and the election of Pope Francis.

More recently, Father Mike Russo worked as an expert consultant for the USCCB, at the time of Pope Francis’s 2015 visit to the United States.

Over the years, he has covered national political conventions, presidential elections, and the funerals and the elections of popes. His special expertise is the news of religion.

His doctoral degree from New York University is in American social and political history. His dissertation, “CBS News and the American Political Experience: A History of the CBS News Special Events and Election Units” won the 1983 Bayard Still Prize in Historical Writing.

In 1990 he was awarded a Shorenstein fellowship at the John F. Kennedy School of Government, Harvard University, where he published a monograph entitled “The Church, the Press, and Abortion–Catholic Leadership and Public Communication.” http://shorensteincenter.org/wp-content/uploads/2012/03/r05_russo-LR.pdf

In July of 2016, he was a visiting professor at the Loyola University of Chicago in Rome teaching Theology 226: The Church & the World.

Michael A. Russo is a Roman Catholic priest of the Archdiocese of Newark (New Jersey) and serves as a chaplain to the high school division of the Santa Catalina School, Monterey. Currently, he writes a weekly website and blog at http://www.francisfactor.com., and

Currently, he authors a website/blog at http://www.francisfactor.com.; and along with his media production crew, he is producing a webcast on preaching entitled “Sunday to Sunday.”

He is an avid swimmer, likes to read historical biographies, has a reputation as a great pasta chef, and, as yet, he has not taken up the frustrating game of golf. Mike Russo lives in Monterey, California.